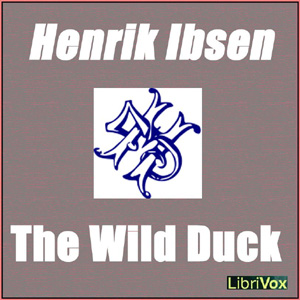 LibriVox recording of The Wild Duck, by Henrik Ibsen. Read by volunteer readers.

The Wild Duck (1884) (original Norwegian title: Vildanden) is by many considered Ibsen's finest work, and it is certainly the most complex. It tells the story of Gregers Werle, a young man who returns to his hometown after an extended exile and is reunited with his boyhood friend Hjalmar Ekdal. Over the course of the play, the many secrets that lie behind the Ekdals' apparently happy home are revealed to Gregers, who insists on pursuing the absolute truth, or the "Summons of the Ideal". Among these truths: Gregers' father impregnated his servant Gina, then married her off to Hjalmar to legitimize the child. Another man has been disgraced and imprisoned for a crime the elder Werle committed. Furthermore, while Hjalmar spends his days working on a wholly imaginary "invention", his wife is earning the household income.

Ibsen displays masterful use of irony: despite his dogmatic insistence on truth, Gregers never says what he thinks but only insinuates, and is never understood until the play reaches its climax. Gregers hammers away at Hjalmar through innuendo and coded phrases until he realizes the truth; Gina's daughter, Hedvig, is not his child. Blinded by Gregers' insistence on absolute truth, he disavows the child. Seeing the damage he has wrought, Gregers determines to repair things, and suggests to Hedvig that she sacrifice the wild duck, her wounded pet, to prove her love for Hjalmar. Hedvig, alone among the characters, recognizes that Gregers always speaks in code, and looking for the deeper meaning in the first important statement Gregers makes which does not contain one, kills herself rather than the duck in order to prove her love for him in the ultimate act of self-sacrifice. Only too late do Hjalmar and Gregers realize that the absolute truth of the "ideal" is sometimes too much for the human heart to bear. (Summary by Wikipedia)

Uploaded by librivoxbooks on February 11, 2012